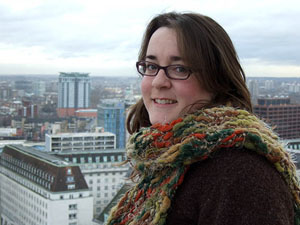 Julia Bird grew up in Gloucestershire and now lives in London. She studied at Reading and Sussex Universities and has worked as an arts administrator and literature promoter since graduating. She works part-time for the Poetry School, and as an independent touring live literature producer. Her first collection Hannah and the Monk was published by Salt in 2008.

One sat, in plain sight, downstream.
The sun, pinning stars to the water.

Feathers the colours of jockey silks. Luck.
Whether that’s something I saw for myself

or a page turned down in a bird book or a feature
I watched on tv, I don’t know – though

I did once peck a fish clean from a plate
with a flat wooden fork. I have felt a thought

dart from its perch in my best imagination
to flash about the branches of a stranger’s brain,

and have brought home from the shop in a blue plastic bag
a half a dozen perfect tangerines.

Eleanor Stewart grew up in Scunthorpe and came to Norwich in 2008 to study for a BA in English Literature and Creative Writing at UEA. She was awarded the Malcolm Bradbury Prize for her dissertation – a collection of poems based loosely around trees. After graduating in 2011, she went on to complete the Creative Writing MA in Poetry as the inaugural Ink, Sweat & Tears Poetry Writing Scholar, completing the course in 2012 with a distinction. Eleanor lives and works in Norwich. She continues to draw on the natural world in many of her poems.

By The Icarian Sea

It was a good orange, firm

but with a spring to it.

towards his sheep (all there)

then dug a fingernail in.

It was a good orange.

He proceeded, with care,

to carve out a land for himself,

smiling when the peel came away

in one piece in his hand.

He turned it this way and that

and pondered on what map it could be,

if he knew any geography.

He considered throwing it

at Ploughman, a little to his left,

but thought the better of it

Instead he threw it out to sea

in a high, wide arc,

where the wind caught it

and turned it to a scudding,

leaning from the cliff-edge,

There was a mass of foaming

feathers amongst the crests

and peaks of waves and more

carried by the breeze.

One caught, sticky, in his fingers

and he wondered what strange

bird it came from.

And in his last breath

Icarus thought that the

to fall with him.