We are delighted to announce the winners of the 2019 Cafe Writers Open Poetry Competition, judged by Zaffar Kunial.

Nights when the moon’s too heavy

I think about my ovaries – those two

those warehouses that came with me,

every one clamouring to call me Mum.

Imagine those fat fists you have to kiss,

the soaring blue of their eyes. Listen,

I won’t lie, many times I feared one would

storm in headlong with its big head

menstruation, even one time on the up

escalator that exits the tube, and once

in the bakery section of Asda, and twice

I let my body wave a baby through –

how they thrived, how they grew, see them

shopping and hanging out their wet towels.

Today a sonographer found what she sought

in there. Think nailed planks over each entry

and exit, in the shape of an X.

the little half-people made it safely out.

on the Isle of Wight or in Canada. Yes,

that’s the place. Say it with me. Canada. 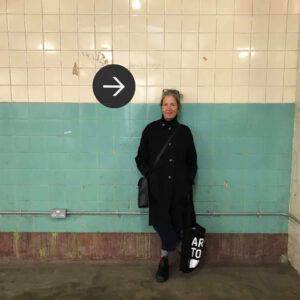 Vanessa Lampert completed an MA in Writing Poetry at Poetry School London with Glyn Maxwell and Tamar Yoseloff, graduating in September 2019. She has been Highly Commended in the Bridport and Troubadour prizes and came second in the Yeovil prize.

She works as an acupuncturist in Wallingford Oxfordshire.
Second prize goes to Anthony Lawrence for Banded Krait
Banded Krait

Sea-snake bites are rare, yet they’ve been known to solder the transmission

of neurotoxins to an expectation of death when, too remote & late

for the Medevac helicopter, poison takes the scenic route through vital organs

that shut down like shadow puppetry in failing light, so let’s say you are

at a sorting table, your hands busy with the living litter of the sea

from Hokusai’s Great Wave, your trawler the longboat, the moon a poor

emblem for a mountain, & let’s say a small fish with electric blue needle-

points for a fan of dorsal fins has flipped onto the table, & because

of afternoon light over the shoulder of a deckhand, your fingers

are injected with a non-lethal dose of oceanic misery, & while the pain

including the woman who has tied her wayward hair into place, this is

where, staring into water so calm you can see the net emerging

head & spills its contents for your selection, you will be absent

above the labouring surge & drone of the engine, & as she traces

the outline of your face, you fail to see the banded krait emerge

with a cut-down base-ball bat reserved for rays & sharks, & in shock

you look at the wound, the puncture marks the colour of the sea

at first light, & as the pain is interchangeable with the times you have

the boat, with a voice saying breathe, help is on the way, a long cloud

of shearwaters blowing over, trailing the sound of your name called

into a cross-current of wind, the wires singing & the dark coming on

too soon in diminishing frames & the chambers of the heart 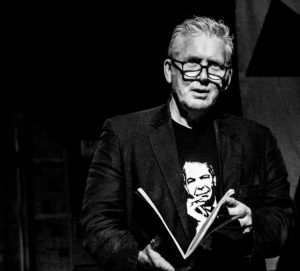 Anthony Lawrence has published sixteen books of poems and a novel. His most recent collection ‘Headwaters,’ (Pitt Street Poetry) won the 2017 Prime Ministers Literary Award for Poetry. He teaches Writing Poetry at Griffith University and lives on Moreton Bay, Queensland.

Third Prize goes to Karen Hodgson Pryce for The Sleeper, 2020

You hear the stoic heart

of the rails. The trusted

the weave of a vacant seat.

Its tease of tumbled Xs.

A crash of crystal as hail

batters the window. About

on. You snatch at handfuls

of aisle and out, out – ready

or not. The latticed

dark of a spurious stop. 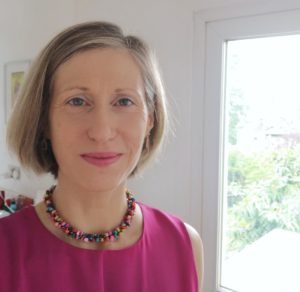 Karen Hodgson Pryce lives in Aviemore, Scotland. She read English Literature at the University of Glasgow and has taught ESOL for 20 years. Her poetry is in Northwords Now, Butcher’s Dog, Black Bough, Lighthouse and Ink, Sweat & Tears. It is also in anthologies: Landfall by New Voices Press &Shared Stories: A year in the Cairngorms. Her short story was Commended in the Neil Gunn Writing Competition 2017. She spends much of her time running, swimming, hiking and cycling around the Scottish Highlands.

As an act of self-love, I bought myself

carnations. I cut them and fed them

with the clumsy devotion

of a new parent, I placed the vase

on my shelf, and for days looked at them,

just looked at them, their rhubarb

and custard frill, their conspiratorial buds

The last time I was bought flowers

I was fifteen and that was only because

his mother told him to; the self at least

is to be relied upon, I always knew my body

was a self-serving temple. I am contemplating

or an artform – sometimes I write

in the drawer. I have heard

this should be a trophy, a badge of honour,

but at the moment I am fundamentally

undeserving, unable even to process pleasure,

this tiredness in me approaching nausea,

to the brittleness of being a child

made to stand outside in the snow

and wait. I think to myself; I will see

these carnations through, I will keep them

until they are dust, until their vase is filthy. 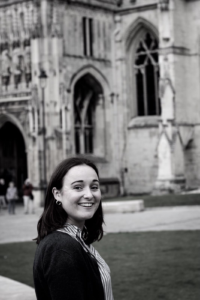 Jenny Danes was born in Essex in 1995 and studied at Newcastle University. In 2013 and 2016 she was highly commended in the Bridport Prize for poetry and in 2016 she won The Poetry Business New Poets Prize. Her work has appeared in various magazines including The Rialto, Magma, The North, The Interpreter’s House and Butcher’s Dog, and her debut pamphlet ‘Gaps’ was published by smith|doorstop in July 2017.

We grew up in our spare time

beyond a tower block island

over the nerves of nettle and bindweed

leaves which clung to the cracked pale soil.

In winter, we would sink up to our chests

in snow and hide inside the unfinished body of a building,

its graffiti erased before it was written,

its three windowless walls wrapped around us

in an embrace that stayed the same except

the times when the mist dissolved their blunt edges.

We pretended this was a furnished room we owned

and thought God could not help us all

until later, and that when our turn came

we had to remember what we wanted.

We leaned against the concrete

which drew the last of our body heat

through tartan woollen clothes a size too small

until we could no longer bend our knees.

From this place we could not hear

the TV announcements that told us how

to love our republic, but we listened

to our silenced town and waited

until somebody missed us.

Elena Croitoru has an MSt in Creative Writing from the University of Cambridge. Her work has been selected for the Best New British & Irish Poets 2019and has been shortlisted for the Gregory O’Donoghue Prize, Wasafiri New Writing Prize, Stephen Dunn Prize, Bridport Prize, Bath Flash Fiction Award and other prizes. She won second place in the Bart Wolffe Award & third place in the Open House Poetry Competition. You can find her on Twitter: @elenacroitoru

Should sandal pass the chalk outline,

the lamp’s limit – should a ribbon’s fall

draw your passage from the world

no indicator of depth where it settles,

and our calculations come in hunches,

the strike of the quarter-jacks crossing the river

in imminence of rain; the devil sat in his hammock

just beneath the nail. Remember the animals

in our windows at the knees of the saints,

how they reflect each one’s pomposity and grace –

the goose at the end of a golden cord, the man himself

set for a parade to demonstrate his quiddity.

So pride does not come into it – if you prosper

it has little to do with our handiwork,

regardless how we sank canes into the soil,

ran channels, led you by your open hand.

Our superstitions the stuff of donkeys

and mountain lions; in defiance of which

dress you in linens tailored in a feminine style.

Matt Bryden is a poet and teacher living in the South West where he runs the Somerset Young Poets Competition. He has published a pamphlet Night Porter (Templar) and a first collection Boxing the Compass (Templar). www.mattbryden.co.uk
The Owl Pellet: Bridget Khursheed
The Owl Pellet

I put it in my pocket wrapped

in inadequate tissue; it works free

and at home appears lost

until, beneath the debris of lip salve,

paperclips, paper pellets to be discarded

and a shoelace, I catch its essence,

the bladderwort of it.

On the windowsill it tells the weather:

a mermaid’s purse on a dry riverbed,

the drop from a familiar perch,

a sinuous gorge on the mud,

and desiccated lichen its intestinal shape

its light weight and durable package

permitted a posting into the pool

Much later the unwrapping

because it merged with the crumble

of the stonework becoming

It resists the prod of a stick or skewer

that skin thick and pudding-like

breathing back against imprint;

until thwacked with a trowel

it spills a cargo of fur and ivory;

the claws of huge rodents hunted in field guides

until the goods left to bleach

at the flowerbed’s edge descend

from fair price to articulated felt

a graveyard by the seashore;

bodies enveloped in beads and blankets

song all washed away.

Bridget Khursheed is a poet and geek based in the Scottish Borders; a Scottish Book Trust New Writers Award winner for poetry, her work has appeared in publications including The Rialto, New Writing Scotland, Ambit, The Cormorant, The London Magazine, Abridged and Gutter; her pamphlet Roads to Yair is available from TwinLaw; and she has just completed an MSc in cybersecurity. Learn more: poetandgeek.net @khursheb

and speaks the future

My date blames my mood

on time of month, then

for the next new moon

And on the radio a graveled voice

speaks of sex and evolution

At home I see the internet occultists

pushing out the nonbelievers

to those with Virgo rising

The President is faking the numbers again

but his constituents don’t seem to mind

and when the balanced newscaster repeats the digits

the voters nod along

And in the neighbor’s bathtub, a woman

pleasures herself with porous crystal,

When the CEO says their technology

Sharon Mariem is an American poet currently living in Norwich and attending the University of East Anglia’s MA program in creative writing. Prior to coming to the UK, she was based in Brooklyn, New York. Her work has appeared in A Shadow Map Anthology (Civil Coping Mechanisms, 2017) and several online literary magazines. She is currently working on a series of poems about cruelty and the concept of evil.

unscrewing a lid feels the same in every country

if you think about it, life is just a montage of unscrewing jars

with other moments threaded in between

pavement doesn’t mean the same thing in every country

if you think about it, life is just a montage of hits and release

with other moments threaded in between

hospitals are the not the same in every country

Kat Dixon lives in London and is studying for her Master’s degree with The Poetry School. Her poems have been accepted to various journals, including South Bank Poetry, Perverse, Tears in the Fence andRialto. Her manuscript, Letters to ex lovers I will never send was shortlisted for the Rialto Pamphlet Prize 2018 and she has recently re-edited it. Her poetry has been nominated for a Forward Prize. She is currently working on a new pamphlet, experimenting with form and exploring the world of drugs.

I have even lived  dream of perfect by Rachel Donati

A coat of her own choosing by Simon Murphy

To the flower lady by Gabriel Moreno

Behind the double glazing by Barbara Marsh

The Photographer insists on Yellow by Elisabeth Sennitt Clough